Governor Dunleavy believes we should view the PFD as a transfer under the historic calculations Alaskans have grown to trust and rely upon.

The bills work to fulfill that commitment by providing full back pay over three years, while also cementing full dividends through 2023 by prioritizing and authorizing the next four years of dividend payments. This removes the threat the PFD will once again be held as political ransom.

According to the Permanent Fund Dividend Corporation, eligible Alaskans should have received $3,678 additional dollars during years 2016, 2017 and 2018 under the historic formula. Those funds – $2.3 billion in unpaid dividends – sit unspent in the Earnings Reserve Account. 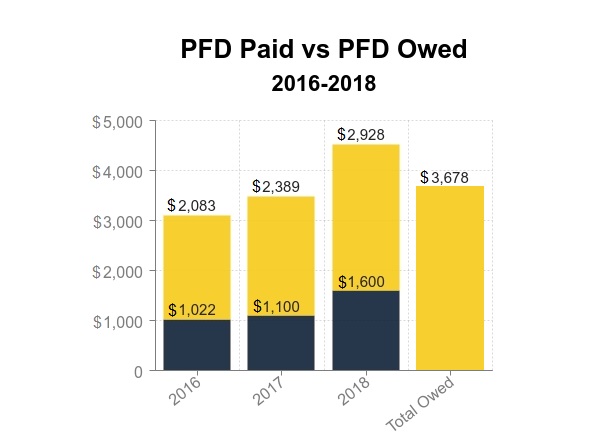 The Alaska Permanent Fund was established – by constitutional amendment – to give future generations of Alaskans the opportunity to share in our states’ rich energy and mineral resources.

As a State Senator, Governor Dunleavy took numerous efforts to restore the PFD under its historical calculations – filing numerous bills and amendments to restore and protect the PFD.

The Governor’s back pay proposal does not expend new dollars, rather returns what Alaskans are lawfully owed. Meanwhile, opponents of restoring a full PFD and authorizing back pay continue to paint a false choice in an attempt to solidify a multi-billion dollar tax increase on Alaskan families.

“As your governor, I will follow the law and fully fund the PFD and inflation proofing.” – Governor Michael J. Dunleavy

“I believe the Permanent Fund belongs to the people of Alaska and support protecting the PFD in the Alaska Constitution where politicians can’t touch it,” – Governor Michael J. Dunleavy

“Eventually, the citizens of Alaska may decide to change the way the Permanent Fund is used. But the people themselves, not politicians, must make that decision for anyone to place trust in it.” – Governor Michael J. Dunleavy