“As we know, we’ve been experiencing for some time in the State of Alaska a fiscal crisis as to what we’re going to do with a fiscal imbalance, and where we’re going to head as a state – what do we value, what are we going to have to do without, and what do we want to emphasize. As we’re running out of savings – we only have about $1.8 billion left in our constitutional budget reserve down from $14 billion – these decisions are going to have to be made soon. As many of you know we introduced a bill in February that was pretty stark, about $1.6b in reductions to close that gap without takin the PFD away, without using taxes. A part of that process was all about having a conversation with Alaskans as to what do we value and again where do we want to go as a State in the future. We’re going to have to talk about how we’re going to pay for things here in the next year or two.

“So, once we laid out that budget and we made reductions, we started to get feedback from the state. All different groups and individuals. We didn’t dismiss any of that feedback at all. We listened. We had conversations with parents, we had conversations with agency workers, we had conversations with legislators. To make a long story short, we’re here today to announce that we’re going to make sure funding for Pre-K Head Start, stays in the budget. It wont be vetoed and when we sign the bill, which should be this week, it will be retroactive to July 1st, the new fiscal year. I feel bad it has taken this long, usually we have the budget done by April, sometimes later – May, June. This year we just received the final budget a week and a half ago.

“I want to thank all Alaskans for your patience, I want to thank you all for your feedback as we worked through this. We’re not done with this fiscal issue, we’re going to keep working through it. What became pretty clear to everybody is that Alaskans value our elders, our seniors, and we value our children, our youngest – that’s our future. For the folks here at this particular program, the Head Start Pre-K program, I want to thank you for all the work that you do, and I want you to know the funding is going to be in place going into next year, starting July 1st so you can continue to do the good work that you’re doing. We will do our best to work through this fiscal issue, we’ll probably ask for input as we do this, but you can be assured from this point forward that you will have this funding.” 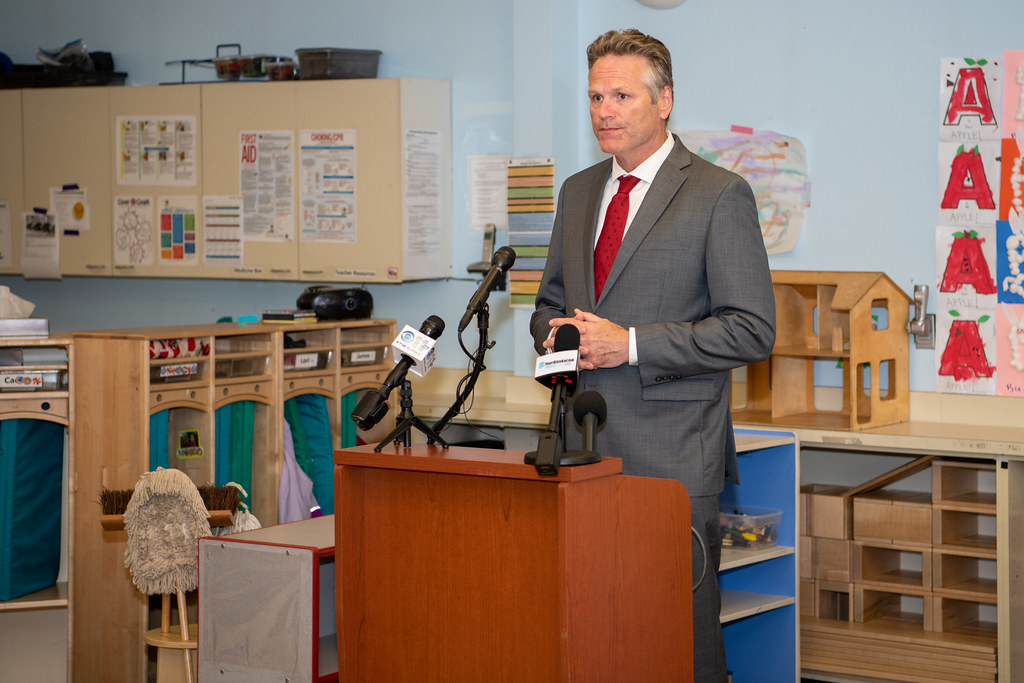 $6.8 million to Head Start Grants – Head Start provides free and comprehensive early childhood programs for children meeting federal poverty guidelines between the ages of 0-5. DEED has been providing State funds for grantees that may be used towards their 20 percent match since 2001. In FY19, funding was disbursed to 17 organizations, including RurAL CAP Head Start, Kawerak Head Start, Chugiak Children’s Services, and Kids Corps. Inc.

$474,000 to Parents as Teachers Grants – Parents as Teachers funds are in addition to $2 million enacted in the FY20 budget for Pre-Kindergarten Grants, as well as the $4.2 million unspent grants carried forward from FY19. DEED has provided Pre-K funds to districts since 2009, and in FY19, eleven districts received funds.

$320,000 to Best Beginning Grants – Best Beginning is a public-private partnership that mobilizes people and resources to ensure all Alaska children begin school ready to succeed.

These funds, retroactive to July 1, 2019, come in addition to the $2 million enacted in the FY20 budget for Pre-Kindergarten Grants, as well as the $4.2 million unspent grants carried forward from FY19. DEED has provided Pre-K funds to districts since 2009, and in FY19, eleven districts received funds.