August 5, 2019 (Anchorage, AK) – Alaska Governor Michael J. Dunleavy and Department of Health and Social Service Commissioner Adam Crum are welcoming news from the Centers for Medicare and Medicaid (CMS) that it has withdrawn its termination action against the Alaska Psychiatric Institute (API) and now considers the facility to be in good standing with federal requirements.

(Video from the Press Conference)

“There have been a lot of positive changes at API due to the actions taken by Commissioner Crum and his team,” said Governor Dunleavy. “It has gone from a state of emergency to a psychiatric facility in good standing with federal and state regulatory agencies. I applaud the leadership at API and DHSS for making the safety of patients and staff a top priority. All Alaskans will benefit from having this critical piece of our behavioral health system functioning safely and effectively.”

This action, officially issued on July 29, 2019, represents a major milestone in API’s efforts to restore compliance after federal investigators found the facility to be in violation with multiple federal and state standards – including more than 80 deficiencies from July to December 2018. It secures API’s ability to continue to receive federal funds from CMS and acknowledges the tremendous improvements in safety and treatment over the last six months. CMS determined that API is in “substantial compliance” with the conditions of participation for a psychiatric hospital and restored API’s CMS certification following an unscheduled site visit and survey conducted last week at the facility.

“This is a significant achievement in our efforts to improve conditions at API and shows we are making substantial progress in ensuring our patients are receiving high-quality care in a therapeutic environment,” noted Commissioner Adam Crum. “I thank everyone working at API for the hard work, time and effort they’ve put in to making the changes needed to return it to a place of healing for our patients.” 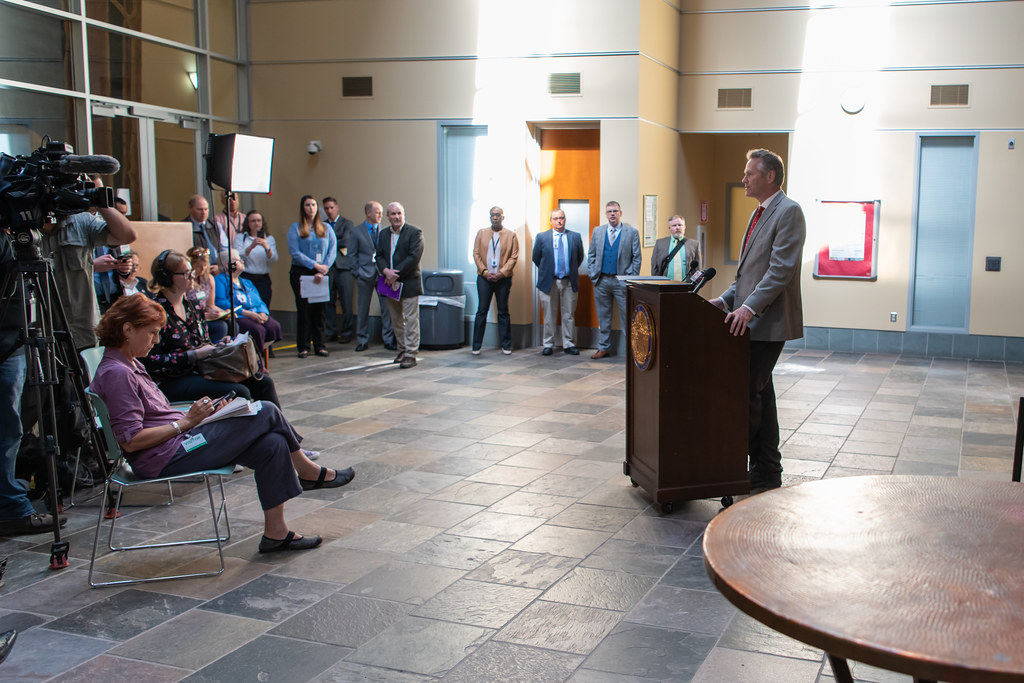 (Photos from the Press Conference)

Since August 2017, API has been under heightened scrutiny from CMS and was more recently under threat of losing certification due to conditions that endangered patient and staff safety, and compromised patient rights. Without CMS certification, API would not be eligible to receive reimbursement for services provided to patients from Medicaid and Medicare and was at risk of being shut down.

In addition to achieving certification, CMS is reinstating API’s “deemed status” through The Joint Commission (TJC) which allows for future surveys to be conducted by TJC instead of requiring more direct supervision by the state survey agency acting on behalf of CMS. API received notification in April 2019 of The Joint Commission’s decision to renew the facility’s accreditation for psychiatric care.

API has also made progress in other areas, including:

API’s chief executive officer, Matt Dammeyer added, “I’m proud to be a part of the positive changes underway at API. When it comes to the health and well-being of our patients and staff, I know that there’s still room for improvement but we will continue to work towards creating a culture of excellence at API.”

The facility is currently managed by State of Alaska employees with Wellpath acting in an advisory and support role to the state’s administrative team. Wellpath is under contract to provide hospital administration services for API through December 31, 2019.