Alaska Governor Michael J. Dunleavy today shared the following message with Alaskans after signing the FY2020 budget with approximately $400 million in line-item vetoes. With an overall reduction in state spending of $678 million, the Governor’s actions eliminate nearly 50 percent of the state’s deficit this year. Dunleavy says he hopes a “two-year process will put Alaska in a position of balancing the budget without new taxes or a reduction of the traditional Permanent Fund Dividend.”

Good afternoon Alaska. Today I signed the State of Alaska operating budget for fiscal year 2020 – which included a series of line-item vetoes to better align our state expenditures and revenues.

I’d like to take a moment to speak to you about the actions we took and the direction we’re headed.

First, it’s important to note that over the past several years, the state of Alaska has attempted to operate “business as usual” under a declining revenue picture.

Over the past several years we have used 14 Billion dollars from our savings to subsidize the government.

This situation, everyone agrees, is not sustainable.

Based on our state’s fiscal reality fundamental changes to our budgetary process had to be implemented in order to better align state expenditures and revenues.

That’s what we introduced to Alaskans earlier this year – a proposal built around the idea that our budget should be: sustainable, predictable, and affordable.

The budget goals and priorities for my administration have been very clear: maintain and protect our reserves… expenditures cannot exceed existing revenues… the budget is built on core functions… and no additional taxes on Alaskans.

But due to the legislature’s limited action on reducing the deficit, today I’ve taken a number of important steps to balance the budget.

I’ve identified approximately 400 million dollars from the budget that will be subject to my line item veto. The state’s fiscal reality dictated many of these changes.

These vetoes should not come as a surprise to Alaskans as they have been part of our proposal since February. Ultimately, the decisions that were made were difficult, but we feel that the State government will still be able to deliver essential services to Alaskans.

While we hoped to balance the budget in a single year, many legislators and Alaskans made a case for a step down approach and advocated time to pivot to a new fiscal reality.

I pledged to Alaskans that I would address these issues – that I would put Alaska on stable financial ground. That’s what this budget does and I intend to keep that promise.

With the state of Alaska now pointed in the right direction, this budget eliminates our deficit by fifty percent. With an overall reduction of $678.8 million this year, next year we can close the state’s remaining deficit of $730 million.

This two-year process will put Alaska in a position of balancing the budget without new taxes or a reduction of the traditional Permanent Fund Dividend.

Over the coming days you may hear from those impacted by our budget. Everyone can clearly see that the State of Alaska can no longer afford to continue down the path of oversized spending, outsized government, and out-of-line priorities. These are difficult times that require difficult decisions.

Additionally, after 151 days of work in Juneau, the Legislature still has significant tasks to complete, so beginning July 8, I have called the Legislature into special session in Wasilla to pass legislation that will pay a full statutory dividend to eligible Alaskans. Once they complete that task, they will need to properly fund a Capital Budget as well.

I appreciate the support for fixing this budget that many of you have expressed to me since I took office. I truly believe that Alaska’s best days are ahead of us, and with this budget we are on the right path. Thank you for listening, have a great day. 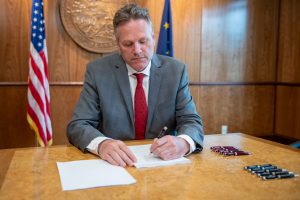